RinkRat 19 Hockey School’s very own Gigi Marvin is headed to her third Olympics!!!  Forty-two players participated in the 2017 US Women’s National Team Selection Camp in Tampa, Florida, from April 29-May 4.  RR19HS alum Shelby Amsley-Benzie and former coach Sidney Morin were among the selection camp players.  After a week of testing, practices, and three inter-squad games, they announced the final roster of the 23 players who will represent Team USA in the 2018 PyeongChang Olympics.  You can check out the full roster here: USA Hockey 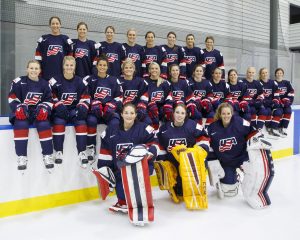