We believe that the purest hockey experience is rinkrat hockey.  Our memories:

School being cancelled due to a snow storm and kids just naturally ending up at the rink for a day of hockey – no coaches, drills, or rules.

Shoveling the lake on New Year’s Eve so that we could watch the fireworks as we skated into the New Year.

Remembering the rink on a Wednesday night filled with hockey players – girls, guys, young, and old mastering their moves.

Skating the varsity practice after school, then catching the end of Pee Wee practice before going home for dinner. After eating, heading back to the rink to skate with the Old Timers. 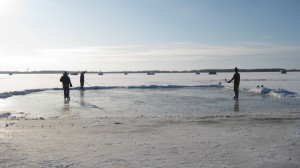 The puck dropped at RR19HS in 2008. The slide below describes some incredible highlights.