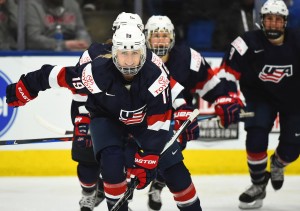 From Bold to Gold!
Gigi and the National Team took gold in the 2017 IIHF Women’s World Championship with a perfect 5-0 record!  Not only did they finish with a perfect record, but they also won their fourth consecutive world championship and seventh in the past eight competitions.  Team USA started off the tournament with a great 2-0 shutout over Canada and defeated their Canadian rivals once more (3-2) in a riveting OT game in the finals.  Despite having a shortened training camp, Team USA made history by being the first women’s team to win on home soil!
You can check out highlights from the World Championship here: USA Hockey 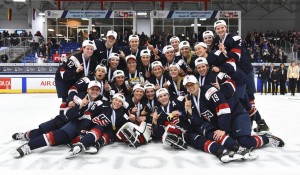 What makes this victory even more remarkable is the notable courage that the women of the national team displayed to stand for what is right.  After 14 months of attempted negotiations and two weeks of risking everything to boycott the actual tournament, their voices were finally heard!  Gigi and her teammates made history in their fight for equality that not only impacts the current women’s team but will forever change girls’ and women’s hockey in America.  Read more on the story here: Washington Post 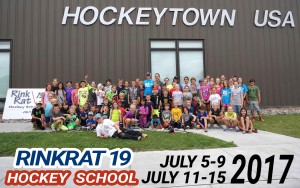 Still trying to figure out your summer plans?  It’s not too late to join us at RinkRat 19 Hockey School.  Spots are filling up fast though, so sign up now for a hockey experience you will never forget!  You won’t want to miss out on the opportunity to see the gold medal on display–Gigi may even let a few lucky campers wear the medal around their necks!