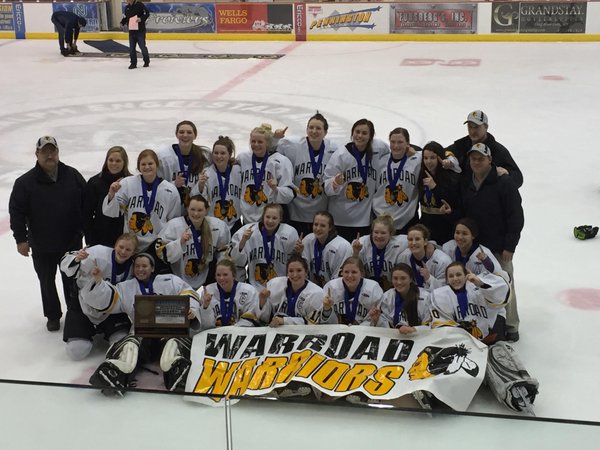 We know that February is a busy and exciting time of the year for hockey families.  It’s been a blast following our campers through their victories and accomplishments, and now it’s time to celebrate with you!
Congratulations to the Warroad Warriors Girls High School team for placing third at the state tournament!  Fifteen of the twenty players in the photo above were RR19HS campers! We are so proud of you!

A special shout out to Katie Kotlowski, who made the State All-Tournament Team!  Katie (pictured in the photo with Gigi and her brother Jack in 2012) was a camper from 2011-2014, and here are some fun facts she shared with us back in 2013:
Favorite hockey player: Gigi Marvin
Favorite NHL team: Boston Bruins
Gophers or Sioux: Gophers!
Favorite RR19HS Coach: Dane Shaugabay
Other sports she plays: Volleyball and tennis
Best part of RR19HS: Skating
Favorite RR19HS memory: Getting Gigi wet in the water games